NEW: UPDATE NOVEMBER 18, 2016
This subject has been in the news lately so I thought I should repost it.

NOTE FROM THE PUBLISHER: It’s been a half-dozen years since the first publication, a number of links have been updated, some were dead. Please send comment if you find links that don’t work.

In the late 90s a buddy and I went to an exhibition at a Las Vegas Public Library. It was The Una Storia Segreta exhibit. Una Storia Segreta (the words in Italian mean both “a secret story” and “a secret history.”) The secret story is about the treatment of Italians and/or Italian-Americans in the United States just preceding and during the Second World War. You are probably aware that persons of Japanese ancestry were placed in American internment camps, but might be surprised to find that many Italians, and Germans in the US were also interned. The Italians and Germans as well as individuals from other ethnic groups were considered “Enemy Aliens.”

The government’s actions – in the 90s – (read on) shows that cooler heads can eventually prevail.
The reason for this post is to shine that light…

“Beginning on the night of December 7, 1941, Japanese, German, and Italian aliens were arrested by the FBI. How could this happen? The U.S. had not declared war by that date.”

The story actually begins in September 1939, when Britain and France declared war against the Axis nations of Germany and Italy (later to include Japan). President Roosevelt at that time asked FBI Director Hoover to compile a list a persons to be arrested in case of national emergency. Names placed on this Custodial Detention List eventually included pro-Communists, anti-fascists, pro-fascists, pro-Nazis, and even some Jewish refugees.

The authority for these arrests came from Title 50 of the U.S. Code, based on the 1798 Alien and Sedition acts, which gives the government power to detain aliens in times of emergency.

Under this authority, hundreds of Italians were arrested in the months immediately after Pearl Harbor. About 250 individuals were interned for up to two years in military camps in Montana, Oklahoma, Tennessee, and Texas. By June of 1942, the total reached 1,521 Italian aliens arrested by the FBI, many for curfew violations alone. Though most of the latter were released after short periods of detention, the effects on them and others in the community are not hard to imagine. 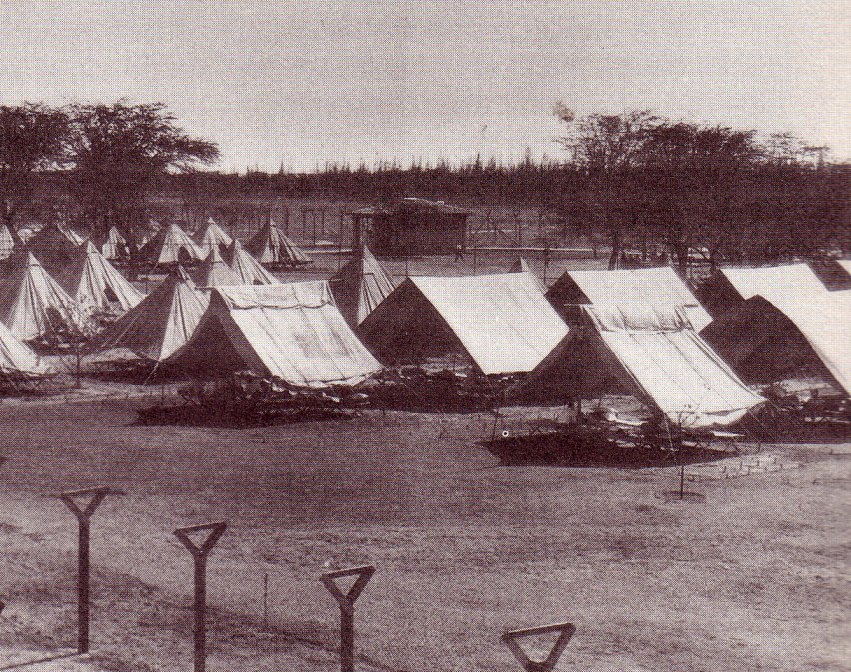 The arrest and internment procedure in San Francisco followed this pattern: FBI officers arrived at night, searched the home, and took the individual to an Immigration Service detention facility at Silver and Yale Avenues. The family was not informed why the arrest was made or what would happen.

Arrestees were sometimes moved to another facility at Sharp Park (now in the city of Pacifica) where quonset huts had been hurriedly set up on a golf course. Some were held there for as long as one year. Later, Italian prisoners of war were also held at Sharp Park.

Quonset huts on the Sharp Park golf course used to detain enemy aliens. Internment camps were set up nationwide for the nearly 30,000 persons processed by the Immigration Service.

Most of the arrestees were then shipped by train to Fort Missoula, Montana, where over 1,000 Italian nationals had been interned since May, 1941. These Italians were merchant marines whose ships had been impounded at Atlantic ports after the European war began in 1939.

In Montana, the interned aliens were given pro forma hearings before boards consisting of military officers and lay citizens. They were not informed of the charges against them, nor were they represented by legal counsel. The information before the boards consisted entirely of FBI reports. Researchers have often noted, on examining FBI files, the many errors, the misinterpretation of innocent acts, and the lack of rumor verification — all of which were found in these aliens’ files.

“IT’S A CHAPTER IN AMERICAN HISTORY MOST OF US ARE not aware of, a period at the beginning of World War II when 600,000 Italian American immigrants were deemed enemy aliens. Many were relocated and even sent to internment camps, simply because of where they were born — including a fair number here in Humboldt County.”

“They called it `the secret story’ — `una storia segreta,'” said Marino Sichi, an Arcata resident who was among those sent to an internment camp. “The Italians considered it a secret. They were ashamed that this had happened to them. They don’t like to talk about it.” read more from a North Coast Journal article…

…“Italian American internees watching a soccer game at Missoula [ Montana. ] In the center, with hat and dark sweater, is S. F. actor Guido Trento.”…(Photo is from the Una Storia Segreta Website.)

“Al Bronzini’s father lost his business and his mother lost her mind. Rose Scudero and her mother were exiled. Doris Giuliotti’s father ended up in an internment camp. And Anita Perata’s husband was held in a detention center and her house ransacked by the FBI.”

“They don’t want reparations, apologies or pity. They simply want the history books rewritten to say that, almost 60 years ago, it was a crime to be Italian.” read more from The San Francisco Chronicle…

“Author Lisa Scottoline’s own grandparents, Giuseppe and Maria Scottoline, were registered as enemy aliens on February 27, 1942, although they had lived in Philadelphia for thirty years without violating any laws. In fact, at the same time that the Scottolines were considered enemies of the country, their son, Lisa’s father Frank Scottoline, was serving in the United States Air Force, fighting against the Axis powers.”

“August 11, 1997 – After Silence, Italians Recall the Internment – Missoula, Mont. By JAMES BROOKE
MISSOULA, Mont. — For decades, Italian immigrant families who lived through World War II in the United States did not want to talk about the curfews, confiscations of fishing boats, forced moves from seacoast towns, police searches of their homes and internments here at Fort Missoula. But researchers are fleshing out this obscure footnote to American history: the treatment of 600,000 Italian citizens in the United States who were classified as “enemy aliens” after World War II began. And that is stirring memories among those who lived through it.” read more…

“FULL TEXT OF BILLS 106th CONGRESS, 1ST SESSION IN THE SENATE OF THE UNITED STATES AS INTRODUCED IN THE SENATE – S. 1909 1999 S. 1909; 106 S. 1909 SYNOPSIS: A bill to provide for the preparation of a Governmental report detailing injustices suffered by Italian Americans during World War II, and a formal acknowledgement of such injustices by the President.” read more…

“An Act
To provide for the preparation of a Government report detailing injustices suffered by Italian Americans during World War II, and a formal acknowledgment of such injustices by the President.” read more…

“ITALIANS IN EGYPT – WWII
From: Egyptian Mail, Saturday, July 5, 1997.
“WHEN Italy’s ambassador to Egypt, Francesco Aloisi de Larderel, unveiled a 75x50cm bronze plaque last Sunday at the Italian Consulate-General in Boulak, he exposed a little known chapter of WW2 history. Some of it droll, the rest unfortunate.”
“Shortly after Mussolini announced from a Venice balcony on June 10, 1940, that Italy was entering the war on the side of the Germans, orders were given in Egypt to round up tens of thousands of able bodied Italians. Many had never been to Italy and were second or third generation Italian residents of this country. Yet, according to the recently unveiled plaque, they were interned in special camps scattered all over Egypt: Fayed, Tantah, Mansura, Moascar as well as the Italian school Giuseppe Garibaldi; of Boulak which is today the seat of the Italian consulate at the corner of 26th of July and al-Gala’s Street.” read more…

The following is a video of the Crystal City (Texas) WWII internment camp. The video is from CrystalCity1945…
*(“A current marker, funded privately and placed at the Crystal City, Texas Family Internment Camp in 1985, inaccurately states that only Japanese American civilian prisoners were held at this site during World War II. German and Japanese Latin Americans and at least one Italian Latin American family were housed here, as were German and Japanese American families.”) *more (below)

December 6, 2006
“Congress yesterday voted to set aside funds for the preservation of the ten Japanese American “relocation centers” from World War II, along with a number of other wartime confinement sites.”…read more from IS THAT LEGAL… [ Link is no longer valid. April, 2013 ]

Michelle Malkin – In Defense of Internment
“Bruce Ramsey of the Seattle Times reported on a document that he says casts doubt on my argument in In Defense of Internment that the evacuation of ethnic Japanese during World War II was based primarily on legitimate military concerns rather than racism and wartime hysteria.”…read more from Michelle Malkin…

Visit the main web pages of The LasVegasBuffetClub.Com…