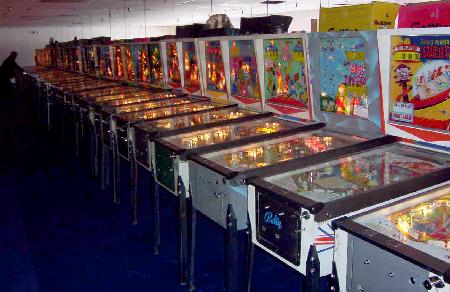 ___Inside the Pinball Hall of Fame___
[Photo is from the PHoF’s website.]

The Pinball Hall of Fame in Las Vegas, A.K.A. The Pinball Museum is located “in a strip-mall on the North West corner of Tropicana and Pecos, at 3330 E. Tropicana – about 30 blocks (3 miles) from the ‘strip’ straight down [east] Tropicana.”

In the 90s a collector moved 1000 pinball machines from Michigan to Las Vegas. Most of that collection is in storage, waiting for restoration; some 190 (current number) machines are in use at the PHoF, and can be played on site for $0.25 or $0.50. Classic Gottlieb, Bally and Williams machines, as well as other manufactures’ machines are in play:
Total Pinball machines: 141
Total Arcade machines: 48
Total EM machines: 65
Total SS machines: 124
Total Gottlieb machines: 50
Total Bally machines: 38
Total Williams machines: 35
Total Other makes: 67
Total PHoF Machines (all types): 190

“The Pinball Hall of Fame is a registered 501c3 non-profit. It relies on visitors stopping by to play these games, restored pinball machine sales, and ‘This Old Pinball’ repair dvd videos (available for sale at the museum). The PHoF has also helped out with fundraising for the local Salvation Army, accepting donations to benefit them. There is a candy vending stand, where the entire 25 cents of each quarter goes directly to the Salvation Army. And after the PHoF covers its monthly expenses for rent, electricity, insurance, endowment savings, the remainder of the money goes to the Salvation Army.”

” [The] ‘cheap side’ approach gives the Pinball Hall of Fame its disarming, thrift-store feeling. The royal-blue carpet? It’s scrap from a Convention Center weekend show. The change machines? Grabed [sic] from the Golden Nugget’s trash dock before the garbage men came. But it’s not about cutting corners – it’s about maintaining an almost obsessive focus on the pinball games themselves. Forget about public relations, marketing, uniforms, or even a sign outside. ‘If the games play, the people will come, quarters at the ready. There’s stuff here that hasn’t been seen since my mom was a kid. And it’s all up here, and it’s playable.'” [Excerpts are from the PHoF’s website.]